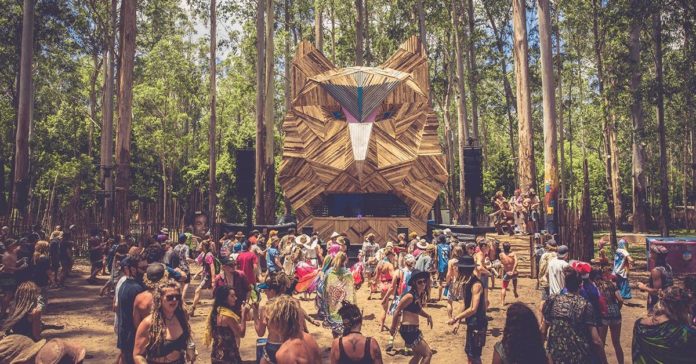 The simple answer to this question is yes – and no.

Okay, so maybe not so simple…

With further research, it’s easy to see why the answer to this question can quickly become complex. But answering it’s important, especially for Aussie doofers who travel overseas and want to get a hit of foreign ‘doof’ culture or for foreigners over here who want to understand what’s so different about the Aussie ‘doof’ experience.

Let us delve in…

As rave culture geared into full swing in the ’90s, more and more rave parties began to pop up in remote or rural areas worldwide. This happened due to obvious reasons. The further away from cities these events happened, the freer people felt to express themselves. In other words, they could fully get their party on…away from public view.

There were lesser risks of media, police, shutdowns and other unpleasantly intrusive forces.

So let’s jump in the time machine for a second and zoom straight to Australia in 1992. The legend goes that a bunch of folks were having a party, and an angry neighbour came over to enquire what all this ‘doof doof’ (i.e. music that’s heavy in bass and drum sounds) was about. Hence the term ‘doof’ caught on, and was used to describe these sorts of parties. It soon gained wider popularity in both Australia and New Zealand as electronic music exploded across the scene and probably got thrown into phrases like, “Hey man, doof this weekend down south. Wanna come?”

But this doesn’t mean these sorts of events weren’t happening elsewhere in the world at the same time. From Israel to Goa, psytrance parties or private electronic music events were also held away from public view – on the beach, in the desert, in the mountains…

The music was similar – normally hard-style or trance genres with a bit of variation mixed in. Surprisingly, the cultural markers were alike too – radical creativity, free self-expression, a higher degree of social acceptance than perhaps found in clubs and parties in the cities, and a larger diversity of attendees in terms of gender, age, ethnicity, personal style and background.

So it’s safe to say that doofing culture was born of electronic music needing a safe space in nature to thrive, combined with the PLUR principles of Peace, Love, Unity and Respect.

Nature and society both in full bloom, uninhibited, so to speak.

But an actual ‘bush doof’ contains the word ‘bush’ and we only really use that word to describe remote areas in Australia. Aside from a singular type of expansive ‘terroir’, Australia also has a unique doofing culture in that we are really the only group who used the word ‘doof’ en masse to begin with.

Simply put, many countries around the world do not have the vast stretches of empty bush land Australia enjoys to put on large and isolated bush doofs. Though a plentitude of doofs, ‘teknivals’ and multi-day music and art festivals certainly occur worldwide, notably brimming with the same associated subcultures.

There’s really not a whole lot of differences between Aussie doofs and overseas doofs that can be objectively agreed upon. Though I’m sure you have your personal views on this.

So what do you think? Are doofs still doofs when they’re not in Australia? And wherever you’re from, do you think there’s anything about Aussie doofs that makes these kind of electronic dance parties different from those around the rest of the world?

Let us know your thoughts in the comments below…we’d love to hear them!

Why is There a ‘Doof Warrior’ in the Mad Max Universe?