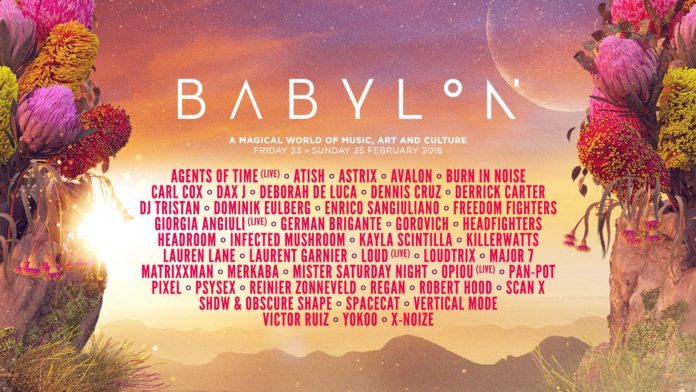 If you’re still dusting off your feathers and boots from the last doof, halt!

Those of you who don’t have tickets: maybe don’t read on ‘cause you might kick yourselves.

Those of you who do have tickets: make sure you get out your favourite hot pink texta to highlight the following festival delights not to be missed…

1. Finding and playing with the pink man

Have you met this dude yet? I haven’t.

But apparently he’s roamed Ozora, Burning Man, Boom and many more playgrounds to boot. And he’s supposed to be awesome.

Often painted from head to toe, he normally comes in green, yellow, gold, blue or pink – a bit like a Zooper Dooper.

He’s known for “illuminating dance-floors” with his collaborative creative performances and sunny vibes.

And he won’t shy away from interacting with folks, so if you’re in a good mood, go on…

Flash him a smile!

2. Getting down to some daring techno with Nina Kraviz

So this recommendation might be a tad biased, just because I’m a teeny-weeny bit in love with Kraviz since I saw her for the first time at Caulfield Racecourse four years ago.

But if you’re into red-hot techno – from the experimental stuff and acid, to throbbing tracks worth fist pumping for – Kraviz will happily take you on a joyride.

Set to grace the Bloc 9 stage at midnight on Friday, the Siberian superstar’s performance is wedged beautifully in between Icelandic enigma Bjarki and techno lord Dax J.

3. Supporting your local crews on the dance floor

Boutique music agency Eat the Beat will be presenting District of Love – a smorgasbord of local musical geniuses from the Killing Time, Red Moon and Translate crews.

Described as “a mystical journey between art and nature where artists and clubbers can fully express themselves”, the acts will be raging on all weekend, so be sure to wander in at some stage for a boogie.

If you’d like to take the balance between art and natures to the extreme, why not preen yourself as a leopard and saunter into the Day Spa Colourseum? Another haven of local music talents, their themed ‘Who’s Who at the Zoo?’ event will be the haps on Friday.

4. Participating in an eye gazing workshop

Eye gazing is a sit-down experience where you come face to face with a stranger and stare deep into the depths of their soul.

Sounds a bit intimidating, but it’s actually quite an enchanting experience! I first eye-gazed at a workshop in Berlin and ended up in tears. I have no idea why. Emotions, I guess.

But seriously, eye gazing is a powerful exercise for bonding, self-exploration and building empathy. If you want to feel all the deep things, make some time for this workshop. The psytrance party can wait!

5. Rejoicing with Carl Cox as he closes the show

I don’t know anyone who can deny Cox’s legendary status. From reigning supreme over techno dance floors for over 30 years to creating the funky-as-flares Mobile Disco with Eric Powell, the 56-year old maverick’s latest moves show no signs of slowing down anytime soon.

Now officially a festival partner (and performer), Cox is a part of the team that makes Babylon so awesome. He’s personally responsible for locking in so many A-class acts for the line-up this year.

Better yet, he’s playing on “Party Shirt Sunday”, so give that old Hawaiian button-down a wash and prepare to get silly.

Take a pause at the Aboriginal Welcome to Country and smoking ceremonies, nom nom on all the yummy foodstuffs that are sure to be there, relish the diverse feast of workshops and musical acts on offer, and look after yourself and the community.

Unfortunately I’ll only be there on the Sunday, (because missing a 4-hour Guy J set: no way José), but I look forward to connecting with your worn but nourished souls to at least close this magical festival together.