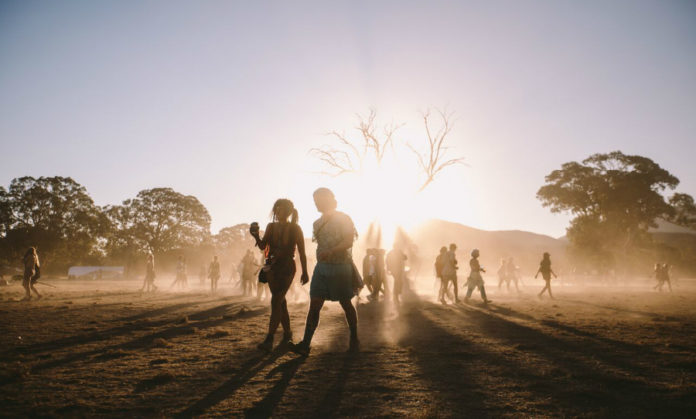 This weekend just gone was a crazy one in Victoria, with Pitch Music & Arts Festival, Esoteric Festival and Golden Plains all happening at the same time. Tumbleweeds could be heard rolling through Melbourne’s city streets, while the doof and festival communities were smashing it out hard in the bush.

Being a techno lover at heart and also a member of a very techno-obsessed crew, I headed to Pitch. Of course. Where else?

This was my third year at Pitch and although it’s not necessarily my favourite party of all time crowd-wise, I find that it really brings the house down music-wise. That’s what keeps me coming back for more year after year. Some of the world’s best DJs like Dixon, Âme and Tim Engelhardt were set to slam the dance-floor, plus a few more personal loves of mine (16BL and Recondite), and…well, boy-oh-boy. Did they deliver.

According to this doof fairy, these were some of the loveliest moments:

1.Tim Engelhardt’s closing track in the box on Saturday night.

This just has to come first. It was such a monumental moment in time for myself and, I believe, many others. As electronic maverick Engelhardt’s bliss-inducing set chugged to a close, he decided to treat us with one more tune – one that I had never heard before but I will remember for the rest of my life. That tune was the newly released ‘Horse’ by Darlyn Vlys (the Tim Engelhardt update.) You can listen to it here. Hearing the repeated lyrics, ‘just give in‘, while closing my eyes in ecstasy and swaying in tandem with my nearest and dearest inside a cage-like structure in the middle of the dead of night is an experience I will absolutely treasure forever. Wow. Just wow.

2. Dancing for hours to an epic Dixon and Ame b2b set.

Most will agree with me that Sunday was probably the biggest day, with heavyweights Dixon and Ame playing a back-to-back 6-hour set at Stage 01 in the afternoon. Bookmarked nicely by atmospheric Recondite and the Amsterdam-born award-winner of a DJ, Job Jobse, the set was spent in a sea of beer-soaked splendour, frivolity and the cutting of fierce shapes. Definitely a highlight for many punters, I’ll bet.

3. Watching a kooky watermelon performance inside the white tube.

This experience was nothing related to music per se but rather a refreshing (both figuratively and literally, with the help of some watermelon) piece of unexpected performance art. Worn and curious, my bestie and I roamed the grounds looking for something to do in the heat of the day. What a lovely treat to take off our shoes and enter an environment akin to an alternate reality, replete with intense visuals, spoken prose on the topic of artificial intelligence, and somewhat cult-ishly costumed figures offering us slices of the bright, red fruit. Random but inspired. These are the bizarre times that really add up to make a doof super memorable.

An awesome doof is made up of the big parties inspired by DJs and epic sets, but also the little unexpected moments shared with friends and charming strangers.

If you were there, what were your favourite moments at Pitch? Let us know in the comments below!