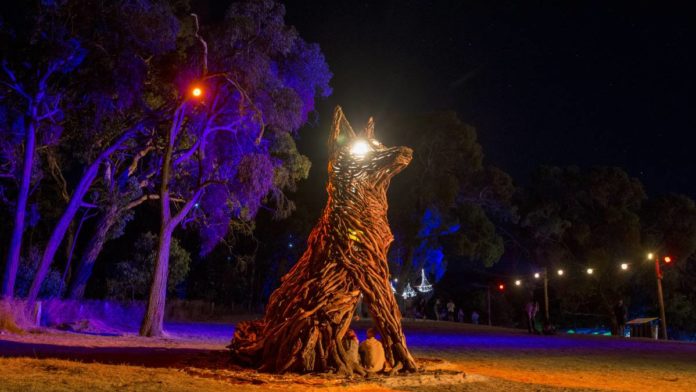 In 2018, long-time attendees of Rainbow Serpent, Victoria’s most iconic doof, are treated to a sight they’ve never seen before on the festival grounds: Victoria Police’s sniffer dogs. Given Rainbow’s reputation as a place for people to let loose freely, these attendees’ reactions predictably varied from mild anxiety about getting caught with drugs to outright outrage at the cops for disrupting the festival’s vibe.

But here’s a question on Reddit that accurately captures what’s on everyone’s minds at festivals like Rainbow:

Can sniffer dogs actually pick up mdma in your ass?

As you can expect from any Reddit thread, the question picked up responses displaying a wide array of wise-assery. Just take a look at the top answer to the query: “What you should do is to put the drugs in your butt. Then get some cold cuts, a nice ham or roasted turkey, and then put them in your butt. If the dog makes a hit, you can just tell the cop that’s where you are keeping your meat for a snack later. Pull out said meat and go on your merry way. If the dog doesn’t hit, then not only did you get your drugs in but also some prime cold cuts.”

Butt seriously, what is the deal?

Kidding aside, is it really necessary to have sniffer dogs around at big festivals like Rainbow Serpent? Is the presence of these canine coppers at these events effective in preventing attendees from downing illegal substances?

Sure, the hedonistic vibe at music festivals often encourages people there to engage in all sorts of risky behaviour, including wanton drug use. Rainbow Serpent is no different. In 2012, the festival hit the headlines not for its set list but for the death of 34-year-old Daniel Buccianti from overdose of prescription meds and LSD. The same thing happened in 2017 when 22-year-old Jacob Langford drank amyl nitrite, a drug meant for inhalation.

These deaths likely provided Victoria Police reasons to deploy sniffer dogs to Rainbow in 2018. Shortly after, the cops issued a statement claiming they have arrested five people for drug possession, two for being drunk and disorderly, one for drink-driving, and 44 for drug-driving at the doof. There’s also a report that a festival contractor was arrested for attempting to traffic 260 grams of cocaine, among many others at the event.

Considering that Rainbow attracts more than 20,000 attendees in the course of five days, these results seem rather paltry. As VICE points out: “Of these punters, 0.025 percent were pulled up on drug possessions, 0.005 percent for drug trafficking. RBTs busted 0.005 percent of attendees for drunk driving, and 0.22 percent from ‘drug’ driving.”

This extreme sensitivity to scent really makes dogs more than capable of identifying different types of drugs by smell if they’re given proper training. Among the types of drugs that dogs can pick out are LSD, opiates, marijuana, meth, heroin, ecstasy, and cocaine. Even if you mask the scent of drugs with stronger scents, such as perfume or cold cuts like in the Reddit example above, there’s still a chance that a well-trained narcotics dog can detect it.

But here’s the thing: dogs, even sniffer dogs, can get tired and bored from spending hours sniffing around. Just like us humans, dogs can get distracted when bored. So even if you’re an innocent bystander, if a sniffer dog finds you attractive and starts smelling your butt, the dog’s handler may think you have drugs on you.

More importantly, sniffer dogs tend to pick up cues from their handlers. It’s entirely possible for a sniffer dog to single you out because you, for example, looked at their handler in a way that the handler doesn’t like. Or the handler may find you look suspicious and set their dog sniffing at you. That’s why some argue that using sniffer dogs to detect drugs aren’t really as effective as some believe. In New South Wales, it’s been found that almost three out of five people stopped by sniffer dogs don’t carry drugs on them at all.

What are your rights when a sniffer dog sniffs you out?

What should you do when a cop stops you at a doof because their sniffer dog scented something on you? The first – and the most important – thing to keep in mind is you need to stay calm while interacting with the officer. The second thing is to know beforehand what rights you have in such a situation.

Here are a few of these rights:

What are your likely penalties if cops found drugs on you?

A survey of a major Australian music festival in 2016 revealed that festival-goers tend to use mostly cannabis and ecstasy at doofs. Doof-goers also use cocaine and other substances, but not as much as the other two. It’s not certain just how much of these drugs are used at these events, but there’s a report that a pair of 17-year-old girls were found in possession of 120 MDMA capsules in the Sydney 2018 Defqon.1 doof.

In Victoria, drug and their penalties are all governed by the Drugs, Poisons and Controlled Substances Act of 1981. Under this law, you can be charged with a maximum fine of $760 if the cops found up to 50 grams of cannabis on you. If it’s a different type of drug, the maximum fine is $4,560. You can’t be imprisoned as long as the amount is no more than 50 grams.

Just like last year, there’s bound to be sniffer dogs again at the upcoming Rainbow Serpent Festival. Remember, if you see them come for you, just stay calm and know your rights beforehand.