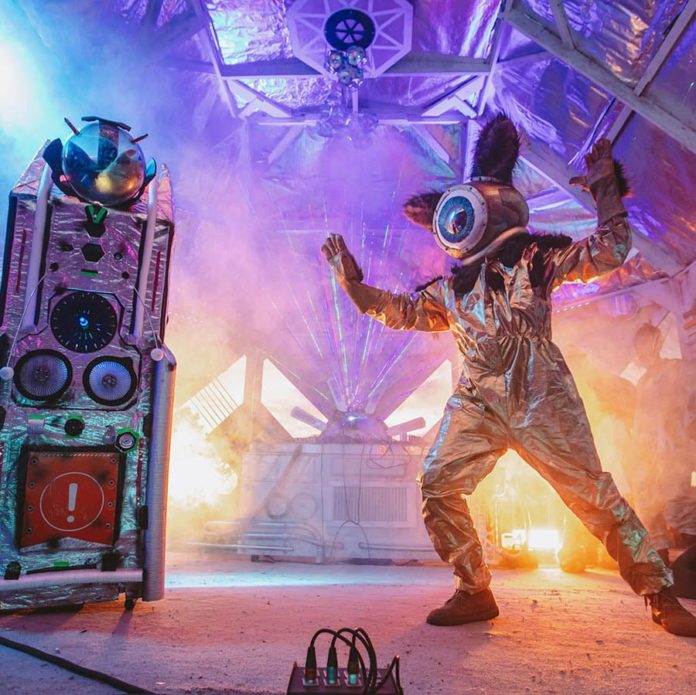 As is the case with many of these kinds of events, the website’s description is typically – yet wonderfully – whimsical and über vague:

“FROM THE DAWN OF TIME, STRAIGHT TO YOUR HEART, CHI WOW WAH TOWN IS BACK WITH AN EXPEDITION EDITION TO RAID YOUR LOST BARK.

LOOKING TO THE STARS AND MOON FOR CELESTIAL GUIDANCE, WE’VE RECRUITED THE SPACIEST OF AUDIO CADETS AND MOST COSMIC OF ARTISTIC CREATORS, BUILDING AN INTERGALACTIC OUTPOST DEEP IN THE AUSTRALIAN BUSH, A LOST DOGS HOME OF GALACTIC PROPORTIONS.”

Right…but aside from the frequent doggo and space references, what’s really the haps at Chi Wow Wah Town?

Among other things, in its own words, the gathering is a “proper 3 days of music & art & culture & camping etc etc”…

But word on the street is it’s not just your average bush doof.

With some on the Melbourne Doofers page believing that the doofing season officially starts with CWWT, it’s clear that this party holds a dear space in the hearts of those in the scene.

What began as a deep house and techno-centric party in the woods, according to revellers, has only grown from strength to strength ever since.

While there’s definitely a banging party-party vibe with a musical focus, one past reveller described the event as “a beautiful conscious community – bringing people together for [an] innovative and soul awakening experience.”

According to the event’s Facebook page, “CWWT is the puppy pack family reunion that recharges our chi after the cold winter and connects our community with as much puppy love and positive energy as humanly possible.”

One unique aspect about CWWT is that the capacity is always limited to 1800, “nurturing the same magic and vibes.” Many folks who attend this love-fuelled affair repeat attend…and for that reason, some have said it’s built a kind of doof family appeal for those who are lucky enough to repeatedly get their paws on a ticket.

“Having been to numerous Chi Wow Wah Towns over as many years,” commented one fan on Facebook. “This event keeps getting better and better.”

But we think the best sweetener is this…

CWWT like to party with a purpose, so in their support for MS Australia they’ve allocated $2 from every ticket to fund the charity’s research into better detection, treatment and cures for those with Multiple Sclerosis.

They’re also partnered with Treecreds this year, a badass sustainable travel company, plus PBS 106.7FM for all the radio station’s community-loving vibes.

CWWT from the outset looks like a seriously wicked time hosted by a credible, conscious crew. But, from experience, we think the best way to know the Town is to go there!

Last we checked, there may be some tickets left, plus some folks reselling…

If you fancy a doof this weekend, why not get your puppy ears on?