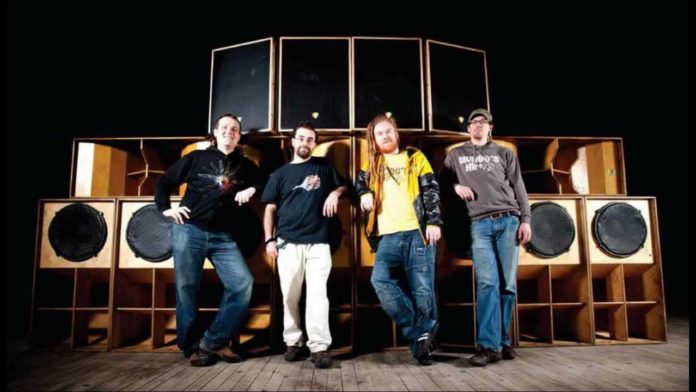 Mungo’s Hi Fi are a Glasgow-based sound system and production unit who pull off that rare trick of making reggae/dancehall that is original and of quality. Mungo’s was the brainchild of two likeminded dance DJs at the turn of the millennium, inspired by King Tubby, Prince Jammy and the UK’s Unity Sounds. True to reggae/dancehall’s DIY ethos, they built their first sound system from speakers found in a skip and began producing on an old Atari.

They started inviting visiting vocalists to their regular nights in Glasgow to hold the mic and then join them in the studio. Following some early recordings on London’s Dubhead records, including debut album Mungo’s Hi Fi Meets Brother Culture, they founded their Scotch Bonnet label in 2005.

Today Mungo’s is a global operation with six members: all committed to spreading their philosophy of serious, seismic productions plus easy going democratic dancehall fun. Highly collaborative, they’ve worked with everyone from Sugar Minott and Ranking Joe in Jamaica to Major Lazer in America, Kenny Knots and Solo Banton in England, and Scotland’s Soom T. So far they’ve released five albums featuring an ensemble of talented artists: 2009’s Sound System Champions, 2011’s Forward Ever, 2013’s Brand New Bangarang, 2014’s Serious Time and 2015’s Serious Time. All combine a keen sense of history with a wicked creative streak and some industrial strength drum ‘n’ bass. Like their inspirations, Mungo’s believe in testing their music where it matters: at their hugely popular parties and events worldwide.

Are we ready for an ‘Eco-Friendlier’ Festival?